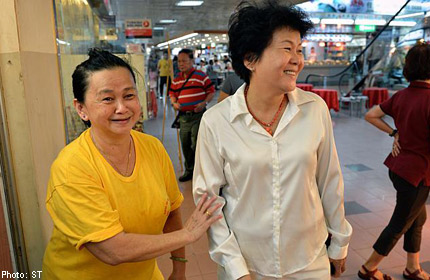 After giving her casino windfall away to charity, “Jackpot Auntie” Choo Hong Eng has gone one step further.

On Friday, the 59-year-old opened a not-for-profit vegetarian food stall employing senior citizens who struggle to land a job.

Ms Choo plans to donate all the cash she makes to the Community Development and Welfare Fund in MacPherson, where she lives.

“MacPherson is an area with a higher proportion of poorer people. We should do what we can to help them,” she said in Mandarin.

Ms Choo became a minor celebrity overnight after winning $416,000 at the Marina Bay Sands casino in 2011. The casino initially refused to pay her, claiming the slot machine had a glitch, but later gave her the full sum after she complained to the Casino Regulatory Authority.

One of four employees is Madam Lee Eng, 58, who quit a job selling burgers to help look after her two grandsons.

“My legs are not very good and I cannot stand for long. It was hard to find work. Only Ms Choo would employ me,” said Madam Lee.

Ms Choo did not disclose the stall’s rent or operational costs, but estimated she would be able to donate $5,000 a month, based on yesterday’s business.

Last month, she was reported as saying she had given her winnings to several charities, as strangers were stalking her and asking her for cash.

“Since then, I’ve had fewer people come to bother me,” she told The Straits Times on Friday.

Among her well-wishers yesterday were Ren Ci Hospital founder Ming Yi and MP Tin Pei Ling, who is in charge of the MacPherson ward in Marine Parade GRC.

Said Ms Tin: “She’s been consistently supportive of charity causes – even prior to today’s opening.”

She said Ms Choo hosts lunches for low-income elderly people. The latest was two weeks ago, during Chinese New Year.

Said nurse Phu Xin Yin, 52: “I’ve been to her Geylang stall. Her laksa is famous. It’s good that she’s donating to charity.”