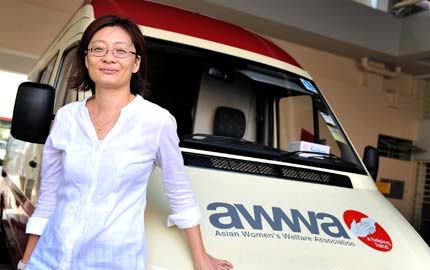 The boy suffered from muscular dystrophy, a disease which causes the degeneration of muscles. As a result, he had limited control of his limbs and had to move around in a wheelchair.

As his school did not have a lift, the 10-year-old could not access the school library, computer lab or music room, which were not on the ground floor. He also could not take part in sports.

Due to his condition, he felt left out and had few friends. He soon lost interest in going to school and his studies suffered.

Ms Sandra Tan, a social worker, remembers the boy. The year was 2005, and she had just joined the Asian Women’s Welfare Association (Awwa). She said: “His parents didn’t want to push him to go to school. But I felt this could not go on. It’d be a waste for him to stay at home all the time.”

With his parents’ consent, Ms Tan helped the boy transfer to another school, which had more accessible facilities.

She also helped the family with transport fees, as they were not well off.

The boy flourished. He made friends and attended school every day. His grades improved and he did well enough to get promoted to secondary school.

Said Ms Tan: “He used to be shy and quiet. But he opened up and talked more about himself.”

Unfortunately, the 15-year-old died about two years ago due to complications from his illness.

But for Ms Tan, his death does not take away from the life he lived.

She said: “What matters is that he did his best to maximise his potential and I helped him to do so. I made a difference to his life.”

Although her portfolio has expanded to include developing programmes and activities, the heart of her work is still helping children and youth with physical disabilities who attend mainstream schools.

She said: “I hope to inspire more people to join the profession.”

And as a professional, Ms Tan has also benefited from increasing support provided by the Ministry of Community Development, Youth and Sports (MCYS).

She used to be the head of Awwa Teach Me Services’ social work and counselling department, handling casework and providing counselling services.

But over the years, she has taken on more responsibility and was promoted to her current position in July last year.

Awwa also paid for her to attend a professional course for non-profit leaders from February to May this year. It also sent her on a five-day study trip to Hong Kong last month.

During this trip, Ms Tan visited its Social Welfare Department, and saw how social services were carried out there.

“The learning and greater exposure help develop and inspire our staff,” he added.

He said: “From what I have seen today, I’m very happy that Awwa has adopted a very holistic approach in the way it attracts and retains its people.”

Over at the Sembawang Family Service Centre, MCYS’ increase in funding has also allowed the centre to better reward its staff.

The organisation’s executive director, Madam Ho Sau Kuen, said the organisation engaged a consultancy last month to review the salaries of its staff.

As a result, the salaries of its social workers and social service staff increased by an average of 11 per cent.

Said Madam Ho: “The feedback has been very positive. Many of my staff have been encouraged by the changes.” The Ministry of Community Development, Youth and Sports (MCYS) announced in March that it would roll out a number of manpower development initiatives to strengthen the social service sector.

As a result, more people are interested in pursuing a career in the social service sector.

The National Council of Social Service (NCSS) has received more than 300 applications for its Professional Conversion Programme for Social Workers this year.

Social service professionals have been given, among other things:

MCYS increased its funding to Voluntary Welfare Organisations (VWOs) running social services and programmes by $10 million last month. The funding norms for salaries of social workers were increased by up to 15 per cent. Adjustments were also made to the funding norms for salaries of other key social service professionals, like early intervention teachers, therapists, psychologists, agency heads and executives.

More local and overseas scholarships and study awards have been rolled out to attract and retain quality manpower.

A new Prime Minister’s Social Service Award was launched on April 5 to encourage more Singaporeans to choose a career in social service. It will complement the current Social Service Scholarship awarded by NCSS.

A new tranche of the VWO-Capability Fund (VCF) was set up in April. The fund size has been increased from $53 million to $100 million for the next five years. This means there will be more funds for training VWO staff and improving the organisational practices and internal processes of VWOs.