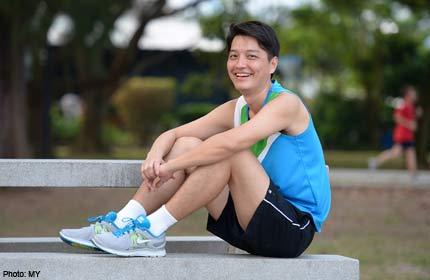 He intends to cover a distance of 1,000km in a 100-day race in Singapore culminating on Christmas Day.

And financial consultant Sean Ong, 34, is doing it all for children.

Funds he hopes to raise from going the distance since he began on Monday – he sets out to run about 10km every morning – will go towards Club Rainbow (Singapore). The charity organisation is committed to helping children and young people suffering from a range of chronic and potentially life-threatening illnesses.
Click here to find out more!

Of his project, called “Run 4 Their Lives”, he said: “Instead of donating money, which everyone can do, I wanted to influence others to donate and raise an amount which…(would be impossible for me) to donate.”

Mr Ong hopes to raise a “six-figure” sum through his run, through pledges from individuals, and has also contacted corporate organisations and churches.

He said: “I was not born with a natural athletic ability.”

He added that, as a child, he suffered from asthma which hindered his participation in sports.

But he was inspired to take up the challenge after reading numerous stories in newspapers about less-fortunate children.

The stories resonated even more with him, following the birth of his first child, a baby girl, last August.

“If I can do this, it will be an achievement (of a lifetime). If I fall sick during this period, I will walk the daily distance instead,” he said.

Mr Gregory Vijayendran, 44, president of Club Rainbow (Singapore), told my paper: “Everyday, the children and youth of Club Rainbow run…a life marathon…with perseverance, despite the setbacks and struggles of coping with chronic illnesses.

Mr Ong is not the only individual who hopes to raise funds for charitable causes through physical feats. Pro-athlete and motivational speaker Shariff Abdullah, 43, who was born without a left foot, will attempt a 101km run tomorrow morning.

The challenge is part of the Craze Ultra 100 Miles Run event to be held at MacRitchie Reservoir. Mr Shariff said doctors had to amputate a further 5cm from the stump on his left leg in 2008 due to a skin infection.

The ordeal left him suicidal but his spirits were lifted when he watched a video clip of South African runner Oscar Pistorius – who has double below-the-knee amputations.

“I want to inspire people – to show that disabled does not mean unable.”

Since then, he has run a total of 977km over the past three years, with a prosthetic leg, in countless marathons. He has also set his sights on reaching the summit of Mount Everest in 2015.

But tomorrow, Mr Shariff hopes to raise $101,000 for other disabled athletes, especially young ones, he said, through online and physical donations. Funds will go directly to the Singapore Disability Sports Council.

He said: “It’s been my childhood dream.”

This article was first published in myPaper.