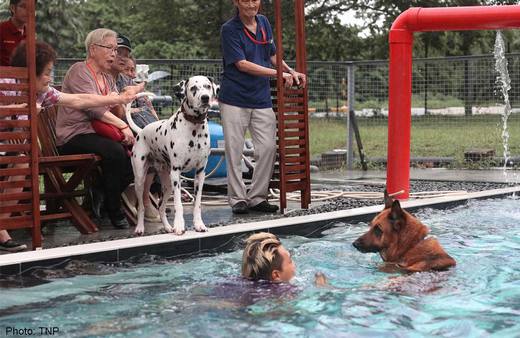 Both the owner and his pets have had abusive pasts.

He struggled with anger management issues, was involved in fights and secret societies.

The dogs he cares for now used to be malnourished and were kept in overcrowded cages by previous owners.

Today, man and animals are trying to deal with unhappy histories so that they can bring joy to others through pet therapy.

Last Thursday, 19 seniors aged 60 to 81 from the Geylang East Home for the Aged, Social Day Centre, went there to cuddle 20 dogs.

The idea is that petting these animals would benefit the elderly emotionally and socially. It’s their third time returning for this pet therapy session as the seniors have given feedback that they enjoy these sessions.

Mr Tan is also president of Voices for Animals (VFA), a rehabilitation society for ex-breeding dogs and cats.

It provides pet therapy sessions and have worked with the elderly and people with special needs.

Mr Tan said: “We believe in the healing powers of love. We try to help mostly those animals that are waiting for their time to go, for those that are helpless, those that people don’t really pay attention to.

“I strongly believe in pet therapy. There’s something about loving an animal and the way it loves you back unconditionally. It calms you down and it heals both ways.”

They have saved about 80 dogs and cats from puppy mills and breeders. Some were rescued off the streets.

He said many were severely underfed, some had bad skin diseases, heartworms, and some had renal and liver failure.

Charismatic with both the animals and the elderly, it’s hard to imagine that Mr Tan was once a self-professed ‘Ah Beng’.

The heavily-tattooed man admitted to The New Paper that when he was 14, he was involved with secret societies.

But all that has changed and now, together with the animals VFA saves, Mr Tan plans to give back to society, one cuddle at a time.

Ex-boxer Michael Loh, 79, told TNP while a white dog sat on his lap: “I used to have a dog just like this named Baby and I loved her very much. Dogs are very smart and intelligent creatures.”

Since the previous pet therapy session, Madam Soh Yin Leng, 75, felt so comfortable with the dogs that she even wanted to swim with them at the ground’s swimming pool for dogs.

She said: “I told everyone I would bring my bathing suit this time round so I can swim with the dogs and play with them more.”

The dogs did take a dip in the pool but unfortunately, because of the heavy rain and the cold weather, it was unsafe for Madam Soh to do so.

Disappointed but nonetheless still enjoying the day, she said: “I’m not afraid of the dogs. When you carry them, they feel warm in your arms and it feels like carrying a baby.”

Mr Tan said after the three-hour event: “It was a hectic day because of the rain but just a pat on the back or handshake, or the elderly saying ‘Thank you for loving us’ is enough. Nothing else can buy that kind of satisfaction.”

He was so bad-tempered he once threatened a family friend with a knife over the death of his pet fish. He was only 14 and the family friend was in his 40s.

But it was not easy growing up in a self-destructive environment. He admitted he used to vent by punching walls and glass.

As a young boy, he was frustrated when taking his PSLE listening comprehension exam as he could not hear the instructions. He then tore up his paper.

In secondary school, Mr Tan mixed with the wrong company and recalls going to parties where sex was involved.

He said: “My teenage years were quite chaotic. I did a lot of bad stuff but I don’t regret them because I’ve learnt so much.”

After he was handcuffed in Secondary 3 following a rioting incident, he changed.

His father was just returning home with dinner. He said: “My father took out the packet of chicken rice and told the officer to let me have my dinner. At the police station, I ate my rice and felt extremely depressed about disappointing my parents.

“That night, I made a personal resolution to get better.”