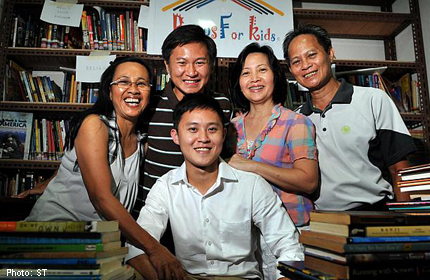 Before a Singaporean family accompanied their maid back to her Philippine hometown for Christmas in 2010, they wondered what gift they could bring along that would leave a permanent impact.

They settled for a library – for the local community – which would be set up in the home of the maid, said National University of Singapore student Xu Cunzhi, 23, who went to Nueva Vizcaya in Luzon with his parents and maid Bernardina Dauz, 53.

The library was so well-received that Mr Xu went on to set up another library in the Philippines with friends.

Last month, the team registered Reads for Kids, a non-profit society, with plans to do even more. Led by Mr Xu, it has about 20 people, including his schoolmates, involved in activities.

Funds will be needed to drive the expansion plans to set up libraries in other areas of the Philippines and even China.

The earlier ventures were easier to pull off because both libraries were set up in existing buildings – the maid’s house and a disused classroom.

The first initiative had seen Mr Xu’s family, through word of mouth, collecting about 1,200 books for shipment to the maid’s home in December 2010.

Asked how they managed to gather so many books then, Mr Xu, a final-year medical student, said: “I guess it just so happened that towards the end of the year, people were looking to do some spring-cleaning of sorts, so the books just started streaming in.”

The books went into Nardy’s Library, named after his maid. Mrs Dauz, known in her Filipino community as Nardy, has worked for his family for 23 years.

The library, set up in an annexe of her house, is run by her 24-year-old daughter. Her younger daughter, 23, gives weekly lessons at the library. Both daughters are housewives.

The library proved so popular among the villagers that the team shipped another 200 to 300 textbooks and teaching materials over in December last year.

Mrs Dauz said: “I feel very happy. All the villagers there are very happy. Not only my village but the surrounding villages too.”

The books range from pre-school to adult fiction but the library focuses on reaching out to 150 school-going children aged four to 12.

Mr Xu said the literacy rate among them is high because they learn English in schools but they have little access to English books, with the nearest public library being about 10km away. “They haven’t got the privilege of growing up in an environment where it’s a norm to have a library around, to have a book around when you want to read,” he added.

Inspired by the villagers’ passion for promoting education, Mr Xu, his older brother, his maid and two of his friends went to Echague town in Luzon in June to set up a second library.

About 1,800 books, including 300 from the National Library Board, were gathered.

The society has plans to visit the Philippines and China in December to evaluate opening libraries in the two countries next June.

“We hope to set up two libraries a year, with six additional libraries by 2015,” said Mr Xu who plans to approach private donors and foundations for funding.

For more information about Reads for Kids, visit www.facebook.com/reads4kids