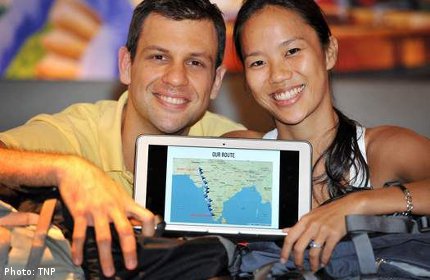 While most people would usher in the new year in regular fashion, this couple will be in the midst of a 3,500km journey across India to raise money for charity.

Miss Renyung Ho, 27, and Mr Adrien Desbaillets, 31, will be taking the ride in an auto rickshaw (a three-wheeler similar to a tuktuk) which they will have to maintain themselves.

Dubbing themselves Team Fluk Fluk, the two entrepreneurs, one Singaporean, the other Swiss, are one of 70 teams taking part in the Rickshaw Run2013. Organised by British company The Adventurists, the event will take participants across India.

The catch? There is no official route, no one to call for help, and they have to do it all in the auto rickshaw which is better suited for short rides than cross-country journeys.

Said Miss Ho: “We just saw it and thought that it’d be something fantastic to do. It’s once in a lifetime, so why not?”

The engaged couple have not done anything like this before, but they are undaunted.

Said Miss Ho: “If you’re used to travelling and have common sense, it shouldn’t be too bad.

“We have a friend from India who gave us waypoints, like this town is all about organic food, this town is a milk cooperative – interesting little nuggets that we’ll try to find.”

The couple, who have planned their route, estimated that they will be driving for about eight hours per day. But cabin fever is not their worry. As Mr Desbaillets said: “We stuck to each other like glue on previous trips.”

The couple met at a friend’s housewarming event two years ago and their conversation quickly turned toward travel.

She said: “Through travel, you learn how people ‘balance’ each other out. You’ll learn a lot about each other.”

He said: “It’s about the little things. The people we’ll meet, the roadside food, the arguments, the breakdowns. It’s about feeling the pulse of the country in two weeks.”

It’s not just about the trip, however, it’s about charity as well.

Minimum amount to be raised Participants in the Rickshaw Run have to raise a minimum of ?1,000 (S$2,000) for charity, and Mr Desbaillets and Miss Ho have raised more than S$35,000 in less than three months for the four Indian charities that they chose.

The charities are Frank Water, Toybank, Barefoot College and The Wildlife Trust of India, which aim to provide clean water, toys, education and preserve wild lands respectively in India.

“We wanted to go with the theme of basic essentials such as toys, nature, water, education. Since we’re covering such a broad area of India, we should therefore cover a broad range of charities,” said Miss Ho.

The couple have raised the money from friends and family through a series of small fund-raisers called “Fluks”.

These Fluks could be anything, from a bake sale to a silent auction, with all proceeds going toward the four charities.

Miss Ho recounted with glee how a friend had shaved off a moustache and goatee he had been growing for years for a Fluk.

“I laughed at him as he looked so strange without it,” she recounted.

The sacrifice wasn’t in vain as it raised $300 for the cause.

“We’re grateful that people were willing to do random things,” said Mr Desbaillets.

The fund-raising doesn’t stop after their trip to India.

It will continue with Fluks such as a movie screenin gand a outdoor concert.

“Many of these people take something they already wanted to do and used it to raise money,” said Miss Ho.

“That’s one of our important messages – doing what you love, while doing good.”

They will leave for India on Wednesday and their journey can be followed at http://ourbetterworld.org