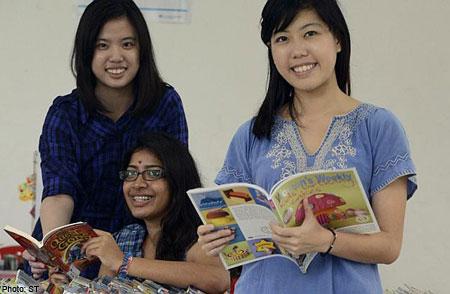 Singapore needs to be careful to ensure that pathways to success continue to exist and remain free for the less privileged, Foreign and Law Minister K. Shanmugam said yesterday.

The Republic’s system of meritocracy has been questioned recently by some people, he said, and their concerns are valid.

“I think (their concern) is legitimate because if you look at it in systems throughout the world, after a while, what happens is that people who have succeeded are better able to help their children.

“We need to be very vigilant about it, to make sure that the meritocratic system really works,” he said.

Society, he added, needs to redefine success and merit so that the focus does not fall solely on academic and material achievements.

One way to do so, he suggested, is to go beyond scholarships that are pegged to academic grades, by offering others that promote the spirit of community service.

Mr Shanmugam was speaking on the sidelines of an inaugural scholarship award ceremony held at the void deck of a rental block in Yishun yesterday.

Six scholarships were given out to undergraduates in Nee Soon GRC.

Instead of fulfilling a company bond, recipients will have to play a part in community development projects within the GRC.

The six were chosen on the basis of their community work, rather than sterling grades.

The scholarship recipients said the money would come in handy to free up resources that would enable them to do more community work.

Some of them have had to work part time to finance their undergraduate studies, leaving them with little time to serve society.

Others, such as Ms Gracia Wong, 22, struggled to finance their community work despite their passion to contribute.

When her father was retrenched during the recession in 2009, Ms Wong decided to pay her own way when she took a gap year before university to volunteer at an orphanage in Kazakhstan.

She had to work as a teacher in two schools to finance her seven- month-long trip.

“I have gained perspective when volunteering overseas but I believe in being involved locally as well,” said Ms Wong.

She, like the rest of the recipients, will have to put in at least 30 hours a month during her tenure to help out with community development projects.

One of the projects she has embarked on is a roadshow that links low-income households living in rental flats with self-help groups. It was held in conjunction with the scholarship award ceremony yesterday.

The scholarships, called the Dymon Asia Scholarship for Social Impact, are funded by Dymon Asia, a hedge fund founded by Singaporeans Danny Yong and Keith Tan.

The scholarships will be awarded every year and are open to undergraduates who live within Nee Soon GRC.

Said Mr Shanmugam: “The scholarship winners will seek to understand the real social and economic issues and learn how to create an impact for society.”