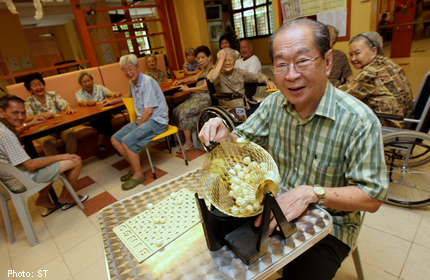 Sceptics have questioned the results of a survey showing that one in three people in Singapore volunteers for a good cause.

They said it was hard to believe that so many working adults found the time to help out.

However, the organisation that commissioned the research said it stood by its findings. It added that the figure was high because it included people who volunteer informally – meaning they do not do it via any particular group.

More than 1,500 respondents aged 15 and above were polled on behalf of the National Volunteer and Philanthropy Centre (NVPC).

The results showed more people in the Republic are giving up their free time than ever before.

But not everyone is convinced this reflects the reality on the ground. Student Timothy Ang, 24, said: “I’m surprised so many working adults are able to find the time to volunteer.” Housewife Tracey Tan, 56, added: “One out of three sounds like a lot.”

Others questioned the criteria used in the survey. Research associate Pauline Tan of the National University of Singapore’s Asia Centre for Social Entrepreneurship and Philanthropy said when most people think about volunteering, they imagine doing it through an organisation, not informally.

“If it is not stated clearly, readers may have the wrong perception that formal volunteerism has risen so sharply,” she said.

Ground-Up Initiative founder Tay Lai Hock wondered whether the numbers were being artificially inflated by “lumping all things together”. The 49-year-old, whose environmental non-profit group connects people to nature, said: “Volunteerism should be helping somebody you don’t know, for a cause.”

The survey’s results have also raised eyebrows because they contradict the findings of the recent World Giving Index, which ranked Singapore only 140th out of 146 countries.

NVPC chief executive Laurence Lien said this could be due to the fact that the index included only formal volunteering. It also measured people’s contributions over one month, while the latest survey asked them whether they had volunteered in the past year.

When asked whether it was right to include informal volunteering – such as dog-sitting for a neighbour – in the poll, Mr Lien said researchers had used the United Nations’ definition of volunteerism. This is: “Time individuals give without pay to activities performed either through an organisation or directly for others outside their own household.”

Mr Lien added that “people-to -people” volunteering was something that the NVPC promoted. “There can be limits at non-profits for volunteer opportunities,” he said. “If you do it in the community, it’s limitless.”

National Council of Social Service chief executive Ang Bee Lian said: “Informal volunteerism has always been around, it is just that some from the older generation may not call it such.”

“If it opens the door to more people eventually becoming regular, formal volunteers then that can only be a good thing.”

Social service veteran Gerard Ee expressed his firm belief that informal volunteerism was valid. “How can you care for the elderly in a home far away when you don’t first start caring for your neighbour who lives alone?”