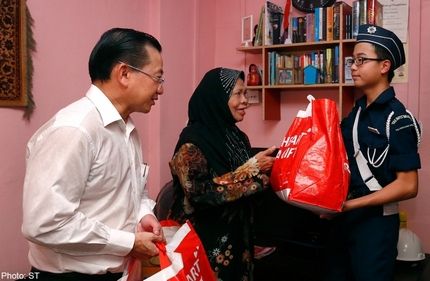 Madam Teng Ah Mui had a simple wish when the Boys’ Brigade asked her what she wanted this Christmas: milk powder.

The 67-year-old has been walking with a hobble since she had a bad fall a few years ago, despite having a steel rod implanted in her right leg.

“The doctor says my leg has not much strength, so I have been trying to drink more milk, but it has become so expensive these days,” said the former cleaner who lives alone in a Jalan Kukoh rental flat. She was among some 35,000 beneficiaries this year to receive food hampers or gifts donated by the public under the annual Boys’ Brigade Share-a-Gift campaign.

Over the years, the number of people receiving this form of aid has increased steadily from 7,000 when the project first started 26 years ago to 40,000 last year. This is because social needs have surged as the population grows and ages, said the organisation.

“Last year was our record year, but this year, the number of beneficiaries referred to by charities dipped slightly. Some no longer need our help as they are getting help from other sources,” said Boys’ Brigade executive director Desmond Koh.

One of the country’s biggest charity projects, the donation drive distributes food items that are donated by the public to disadvantaged individuals. It also fulfils specific Christmas wishes for the less privileged, such as toys or home electrical appliances.

Though the large-scale project has been running for decades, the group decided to make some changes this year.

First, it changed the mix of items in the hampers to suit the needs of the beneficiaries better. For example, adult milk powder is included in the hamper this year so that the beneficiaries can have more essential nutrients in their diet as many of them are elderly. A number of them also do not cook often so more snacks such as biscuits were added.

Second, the charity also offered overseas Singaporeans a way to do their part for the needy here.

This year, they could use their credit cards to purchase the food hampers through NTUC FairPrice’s online shopping site.

The food items that came in via gift boxes at 13 FairPrice supermarkets islandwide or through its website were then packed and delivered by more than 3,500 Boys’ Brigade members.

Nearly 1,000 members of the public also helped to deliver items to the beneficiaries.

People can still donate food and household hampers via FairPrice’s online portal until the end of the month.

Mr Lui Chong Chee, chairman of the project’s organising committee, said at its closing ceremony yesterday: “While we have achieved our target, the project has not ended. We sincerely hope that more will join us on our journey to deliver the food hampers, so that our beneficiaries can receive their gifts as soon as possible.”

For more information, the public can call the hotline at 1-800-227-4273 or visit the website www.bbshare.sg