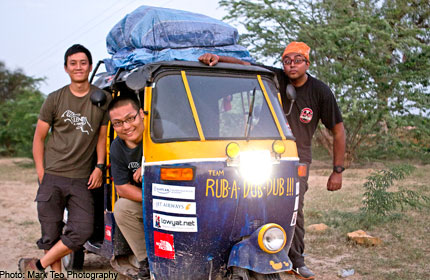 They were conned of their money, robbed of their camcorder, got lost in wet weather, suffered from food poisoning and were attacked by a cow.

Despite all that, the team from Singapore braved city alleys, farmlands and swamps in India to come in second in a charity race last month to raise funds to provide clean water for needy Indians.

The 11-day race, called The Rickshaw Run, involved 69 teams from around the world travelling 3,500km from the eastern to the western part of India on a motorised rickshaw.

The race was organised by a Britain-based group called The Adventurists, which organises different types of races around the world to raise funds for the underprivileged.

The trio said that they wanted to challenge themselves to get out of their comfort zones, while helping those in need, by participating in the race.

They also took photos of their journey and shot a motion time-lapse video during the race, so they could later auction them off to raise even more funds for the cause.

Mr Peter said: “This project means a great deal to us, especially as Singaporeans lead relatively comfortable, sheltered lives and have the luxury of just turning on the tap and getting drinkable water.

“We want to do our best to provide (clean water) to as many people as possible.”

But the race through nine unfamiliar Indian cities in difficult road conditions and in a rickety motorised rickshaw with a top speed of 50kmh was no easy feat, he said.

Not long after the start of the race in the city of Shillong, Mr Peter’s $3,000 camcorder went missing.

They were also asked to pay more for an extra “permit” for their motorised rickshaw to pass through the border dividing Assam and Agra. A group of men also extorted “entrance fees” from the trio when they wanted to visit a large open-air laundry area in Dhoby Ghaut, Mumbai.

The team also had a close shave when the driver of a large vehicle, impatient with the slow speed of their rickshaw, tried to run their vehicle off the road.

But there were funny moments, too. While passing through a pitch-dark alley in the city of Varanasi, Mr Peter was headbutted by a cow from behind.

Frightened, he instinctively started to whack what he thought was a thief, before realising his mistake.

Photos of the team’s India trip will be displayed at an exhibition in January next year and auctioned.

They are hoping to raise at least $16,000, which will go towards building a water-purification plant to provide clean water for some 18,000 people in India.

This article was first published in mypaper