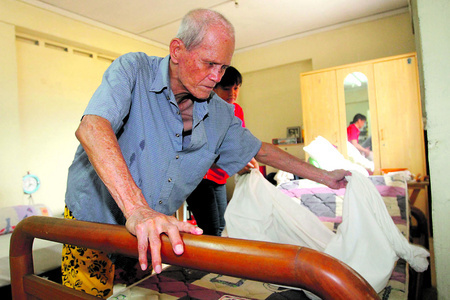 Elderly are making a difference by helping their peers

Mr Lim Geok Inn, 78, lives in a rental flat. Every day at about 7.30am, he is the first to arrive at a seniors’ activity centre at Bukit Merah View and is among the last to leave at around 6pm.

Mr Lim is a volunteer at the centre. Everyday, he opens the doors to the centre and locks them at the end of the day. In between, he takes out the rubbish, helps the elderly get off the bus when they arrive in the morning, buys food for them and clear their plates – among many other things that he helps out with.

Mr Lim does not see himself as needy – and he does not want others to treat him as such. “What I can still do, I’ll do,” he said.

Mr Lim is among the growing number of senior volunteers who are stepping forward in a multitude of areas, regardless of their own age and personal circumstances.

NTUC Eldercare General Manager Lim Sia Hoe said: “We’ve opened up more opportunities to the needy to volunteer, so it’s more common than before that they do this. We are doing this because it is good for them – volunteering raises their self esteem so that they don’t feel so defeated.”

Last week, NTUC Eldercare also teamed up with the National Kidney Foundation to enable its dialysis patients to volunteer at day care and senior activity centres.

FROM computer training TO tutoring the disabled

Apart from helping their peers, elderly volunteers make a difference in a variety of areas including hosting international students and helping to rehabilitate mental patients.

According to voluntary welfare organisations (VWOs), elderly volunteers are more patient and connect better with the organisations’ target groups.

“Being more patient, older volunteers are willing to listen, and not just teach. They are also better at connecting to other older people or the disabled, whose learning speed and reactions may not be fast. If the volunteer trainers are young and teach at a faster pace, they will be lost,” said Ms Lily Lim, a centre supervisor for the Handicaps Welfare Association (HWA). She noted how elderly volunteers were better at conducting IT training at her centre.

Mr Lam Tuck Choy, 58, is one of the volunteers at HWA, where he teaches IT applications such as Microsoft Office three or four times a week.

Mr Lam, a retiree, described himself as a computer hobbyist. “Since I know such skills, and have retired, it seems a waste that I don’t share them with those who need it,” he said.

RSVP Singapore – The Organisation of Senior Volunteers said the number of its active volunteers have increased in the last few years from about 40 per cent five years ago to about 60 per cent currently.

The organisation has about 1,000 members – half of whom are between 61 to 70 years old. A decade ago, the membership figure was about 600.

According to RSVP, its senior guiding programme is the most popular among its volunteers. Under this programme, volunteers work as gallery guides at the Science Centre, for instance. In all, RSVP offers eight programmes, including mentoring at-risk students, and tutoring the disabled. Some of its volunteers also help at KK Women’s and Children’s Hospital where they provide concierge services.

RSVP Vice-President Ngiam Tong Yuen noted that, in general, those currently between 55 and 65 years old are better educated and more financially sound compared to their parents’ generation.

“(They) are not ready to retire in the old way. They want to carry on an active life and many are signing up as volunteers,” said Mr Ngiam, who expects the uptrend to continue.

Over time, the type of volunteer activities will evolve as more seniors come onboard to contribute their expertise, he added.