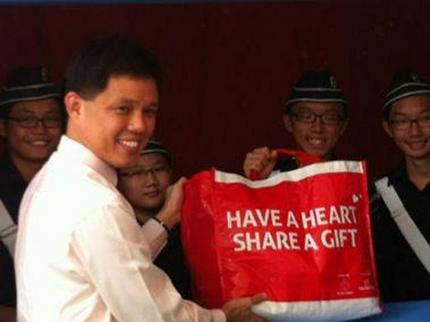 The Boys’ Brigade Share-a-Gift project will aim to fulfil the wishes of 30,285 beneficiaries this year, the highest number to date.

This includes 22,086 beneficiaries who will each receive six months’ supply of general food and household items.

The charity project, which is into its 25th year, hopes to rally more people to spread the Christmas cheer to the needy.

Special items on beneficiaries’ wish lists include simple luxuries like a pair of tickets to the zoo and household items like vacuum cleaners.

Chairman of the Boys’ Brigade Share-a-Gift project Lui Chong Chee said that the initiative is one of Singapore’s largest and longest running charity projects.

“25 years has been quite challenging for us. I remember that in 2008, we actually had struggles with finding sponsors… We used to collect gifts for 7000 beneficiaries; today we have more than 30,000 beneficiaries. So we really need to engage more logistical support, more boys from the Boys’ Brigade, and get the public together to help out in the distribution and the giving,” he said.

Acting Minister for Social and Family Development Chan Chun Sing, who was at the project’s main gift box in Toa Payoh, acknowledged that school uniformed groups like the Boys’ Brigade play a special role in developing the youth.

“They imbue in them a sense of discipline, a sense of contribution, and all these are important values for fellow Singaporeans who are in their growing up years,” said Mr Chan.

Mr Chan was a boy scout and also previously Singapore’s chief of army.

The acting minister said that the Boys’ Brigade Share-a-Gift project reflected the kind of society that Singapore wants, and that the project was a very important event in Singapore’s calendar.

He also said that he hoped the BB’s decision to move its main gift box to the heartlands for the second time would encourage Singaporeans to see sharing and caring as an integral part of everyday life.

From now until December 19, the public can donate non-perishable food and household items at the open space between Toa Payoh Entertainment Centre and Block 192, Lorong 4, Toa Payoh, or at any of the other 13 boxes located at various NTUC FairPrice outlets.

Those wishing to fulfil specific wishes can adopt them from any of the three Wish Trees.

Members of the public can also help deliver the donated items on 8 and 15 December.