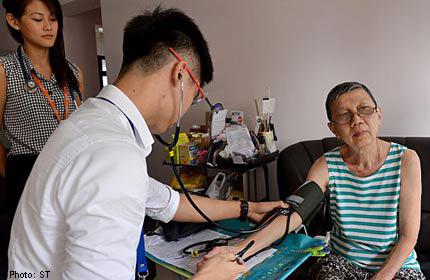 While their peers were resting or catching up on some study, 300 medical students spent the weekend fanning out across an estate to offer free health checks.

The team visited 480 flats in five blocks in Taman Jurong and held a mass screening, giving out items such as thermometers.

It was part of the neighbourhood health screening programme run by the National University of Singapore’s Yong Loo Lin School of Medicine.

The seven-year-old scheme – which helps the poor and aged – has more than doubled its number of volunteers, from 240 in 2006 to 500 this year.

On Sunday, Madam Leong Chang Ngin, 66, was greeted by the sight of three medical students at her doorstep.

The trio were accompanied by a phlebotomist, who is certified to draw blood for medical testing. They screened Madam Leong for high blood pressure, high cholesterol and diabetes. “This is my second time having these students come to my home to check on me, and it’s a good thing,” said the office cleaner, who lives alone.

The mass screening took place at a Taman Jurong void deck. Health-care packs, containing items such as pillboxes and bandages, were distributed.

Students taking part in the scheme also conduct year-round follow-up checks on residents who need more help. So far, the scheme has covered three areas – Taman Jurong, MacPherson and Bukit Merah. Added to the areas will be Eunos Crescent, where another group will visit 740 units in two weeks’ time.

Second-year students Ke Yu He, 21, and Christopher Thng, 20, are leading this year’s outreach efforts. “It’s a meaningful experience as we learn a lot from door-to-door visits,” said Ms Ke.

“Here, we reach out to residents who may need help but don’t actively seek it, which is quite different from our experiences in the clinics.”