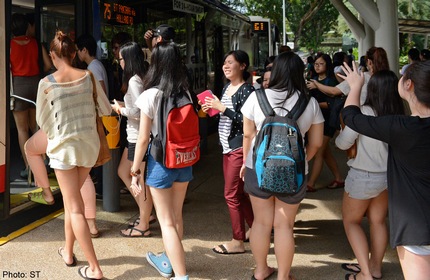 These are some of the common perceptions of Singapore’s youths today.

However, it appears that they are defying these labels, according to recent findings from the National Youth Survey that was conducted from Sep to Dec last year.

The survey, which was published by the National Youth Council (NYC) showed that, compared to a decade ago, almost two-thirds of local youths are involved in the community as part of a social group. The number of youths involved in social groups has risen to 65 per cent in 2013, up from 44 per cent in 2002.

This in turn provides them with a close circle of friends whom they can rely on in the face of increasing stress and uncertainty.

Maintaining strong family relationships is also a top priority for Singaporean youths. However, less than half (39 per cent) expressed desire to get married, and 37 per cent hope to have children.

Majority (86 per cent) also feel that it is important to take care of their parents in their old age regardless of circumstances.

The survey also showed that youths here express mixed feelings towards welcoming other nationalities to study or work here. Nevertheless, they remain comfortable with other races and nationalities as co-workers or neighbours, showed the survey. On a scale of one to five, they scored 3.28 points, down from 3.8 points in 2010.

At the same time, their level of national pride and well-being remain high, and continue to report high levels of self-esteem and self-efficacy, taking pride in their own personal development, aspiring to hone new skills and scaling greater heights in their careers.

While they have expressed positivity in areas of social community and family ties, the survey also showed that youths express higher levels of stress compared to three years ago.

Future uncertainty was the main concern among the youths polled. Other concerns include finances and emerging adult responsibility.

Minister for Culture, Community and Youth, and National Youth Council chairman Lawrence Wong said the National Youth Survey results affirmed the Government’s move to increase opportunities for youths to pursue their aspirations and, at the same time, contribute to the community.

“Starting with our review of *SCAPE and its programmes, the National Youth Council will continue to gather feedback from our youths, to better understand their aspirations and challenges, and nurture their drive and creativity to enact positive change in the community,” said Mr Wong.