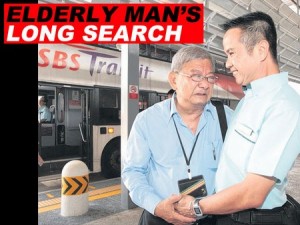 They say a little kindness goes a long way.

For one elderly bus commuter, a journey to find his benefactor took eight months.

On 6 October last year, Huang Ya Mi was waiting for bus service 35 at Bedok at 7am when he got into trouble and could not walk.

“It was raining at the time and the bus was coming into the bus stop. I was rushing to cross the road and tripped on the road divider. I fell on the grass patch and my legs hurt so much that I could not get up,” said the 75-year-old security officer.

Bus captain Wu Chun Gui happened to drive past and saw Mr Huang on the ground.

He stopped his bus immediately and helped the elderly man to a seat on the bus.

But Mr Huang said he would like to take a taxi home. So the 50-year-old bus captain stopped the bus, helped the elderly man get off, and even hailed a taxi for him.

When Mr Huang arrived at his home in Hougang, he realised he did not have to pay the fare – the bus captain had already given the taxi driver $20.

After eight months, the elderly man finally got to meet the kind bus captain.

Mr Wu was both surprised and touched to meet Mr Huang again and said that he had not expected anything in return for helping him.

“At the time I was worried only about his safety and getting the taxi to send Mr Huang home safely,” said Mr Wu.

Tearing up at their meeting, Mr Huang tried to give the bus captain a red packet and return him the $20 taxi fare, but Mr Wu would not accept.

On his part, Mr Huang was brimming with joy at meeting his benefactor after long search for Mr Wu.

“It’s rare to see such caring bus captains! I wanted to meet him again in person to thank him, and take a photo too!” said the elderly man.

This article was first published on inSing