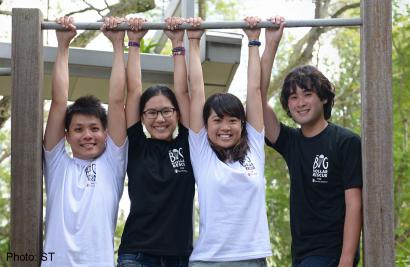 The cost of enough water purification tablets to give 350 litres of clean water to Super Typhoon Hai-yan survivors in the Philippines: S$1.20.

That is the “rescuing power” of the Singapore dollar, according to a final-year project by four Nanyang Technological University (NTU) students.

Called The Big Dollar Rescue, the project aims to raise awareness of the Singapore dollar’s value in international aid, and encourage local youth aged 17 to 25 to give by putting into context what their donations can do overseas even if they seem paltry by standards here.

The campaign is the brainchild of Miss Rachel Gong and Miss Samantha Branson, both 22, and Mr Li Zhengliang and Mr Michael Chin, both 24. All four study in NTU’s Wee Kim Wee School of Communication and Information.

The Singdollar has been growing in strength, hitting recent highs against the Malaysian ringgit and the Australian dollar, for instance.

When Mr Chin and Miss Gong travelled to Myanmar last June, they found themselves surprisingly well-off, even though they were on a tight budget. Miss Gong recalled how a mere S$18 bought them a five-course meal.

“Our strong dollar has empowered us very much on a global scale. When you travel around the region, you realise how rich you become, even if you’re just middle- class in Singapore,” said Mr Chin.

Added Miss Gong: “Instead of spending power, you turn it on its head and think of it as the rescuing power of our dollar.”

The students are working with international charity Save The Children, which helps the group figure out what monetary donations translate to in terms of overseas help. In another example, $20 can help cure 15 Syrian children of pneumonia. Such real-life instances, said Miss Branson, allow people to visualise the difference that their money can make.

The Singapore Red Cross does the same for local causes, for instance, by letting donors know that S$2 can buy a day’s supply of diapers for a resident at the Red Cross Home for the Disabled. “This is the era of informed giving,” explained Singapore Red Cross secretary-general Benjamin William.

Mr Chin believes that if youth here realise what they can do with their pocket money, they will be even more willing to help when they start earning their own salaries.

Last month, his group launched a “covertising” initiative which will run until early March, inviting Facebook users to use campaign images by The Big Dollar Rescue as their cover photographs.

“We have no money,” said Mr Chin, explaining that finding funding for a campaign with an international cause has been hard. “We can’t buy print or outdoor space. So we’re going to use free space from the place our target audience lives. And they live on social media.”

The group, which has several guerilla- style events planned at several tertiary institutions here next month, will wrap up its campaign with a forum where about 100 youth can chat with speakers from Save The Children and other non-governmental organisations.

Said Mr Chin: “The Singaporean youth of today is not one who will be guilt-tripped into giving. You need to engage and inform them.”

For more information on what your money can do overseas, visit www.bigdollarrescue.com